An all-inclusive guide on how to identify Android security problems and what you can do about it.

How can you find out if hackers have taken control of your Android device? That is the question that has been pondering in the minds of every Android user. Can you tell, just by looking at your Android device whether it’s venerable or not? With windows, we know that your antivirus software can detect and counteract most malware. On the other hand, some adware and spyware are undetectable by your typical antivirus software. In addition, they may also slow down your PC’s performance considerably. Sometimes, infections in android devices can be detectable. In one reported case, an android cell phone user was unable to access her text messages, she received a message citing: “Text messages locked”. Then as soon as it appeared, the text message disappeared. In another reported incident, a user downloaded an android app from a third-party website (instead of the play store) and almost immediately after installing the app, the user’s entire android device was wiped clean – including the Android operating system. There are some other tell-tale signs – listed below – which guide users on how to detect an infection on Android devices.

Users are often tempted to download cracked apps that would usually end up costing a few dollars. Say, you download a torrent for free angry birds, or for an app that you would normally pay for. However, once the application is installed, the virus is activated, and if you are unfortunate enough to not update your antivirus software – or have no antivirus installed on your device – your android device could seriously be compromised.

Some viruses can transmit your personal information unknowingly. Though, there is a way to figure out whether your personal information is being transmitted or not. One way to do this is by auditing your sending and receiving data. Unknown data transmitted over 10 MB could be a sign of an infection. Also, figure out how much data you’re normally using and then compare it with the actual data used.  Applications – that require little or no data connection – that are consuming unusually large amounts of data can indicate they are malicious. One example could be of a dictionary app, you wouldn’t expect the app to consume data when not in use, yet it’s been consuming far more data than it’s supposed to.

Another sign of a malware infection is rapid battery expenditure, regardless of shutting down all battery consuming applications; your batter is draining quickly. This is a sign that an application – or in most cases – malware, virus or some other infection is busy infecting your Android device. One should regularly audit these applications that consume the most battery to determine the underlying cause of excessive battery drain.

Setting up a strong password, pin or pattern will ensure that others are not able to access your device. Your personal data could be comprised in case you fail to properly secure your device. A friend or a jealous individual can easily download and install a malware on your Android device. In addition, also lock your secretive data (as you wouldn’t like others discovering your personal secrets on your phone). Apps like Folder Lock Pro for Android are a great example of apps that provide fool-proof data security.

Did you root your Android device? If so, you’ve just further compromised your device’s security. Therefore, if you are thinking of rooting your device – don’t do it – as rooted devices are more venerable than un-rooted devices. 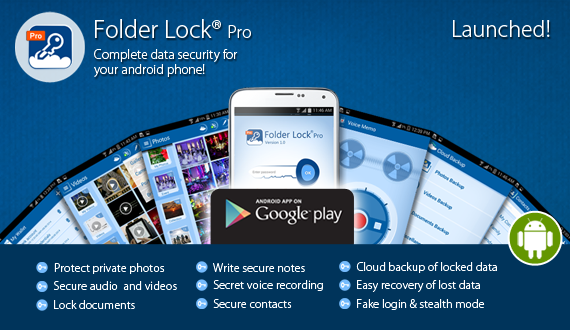