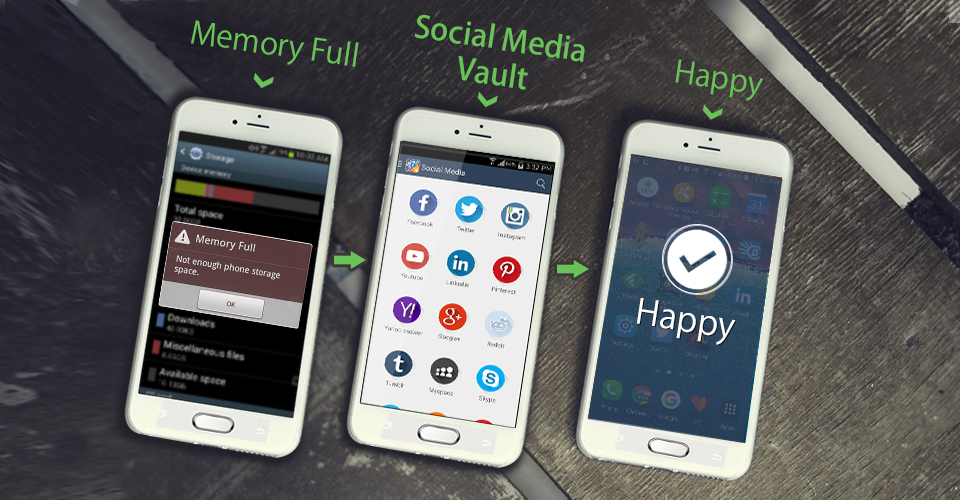 Now consider an example where you’ve bought a new phone or in case if you have reset your device, you’d lose all of the previously installed apps and you’d have to go through a lot of pain to re-download them again.

But that’s something that you already know right? I mean there’s nothing new about the above written statement? I know, but here’s the deal! Consider an app that lets you use 50+ socializing apps without having the trouble of installing their apps on your devices… wouldn’t that be a sight? Exactly!

An app known as Social Media Vault simply lets you do so. How? Well it’s simple. All you need to do is get this single app on your device and immediately start using all of your favorite socializing apps. I’m sure a range of 50+ apps would be sufficient enough to fulfill your dose of regular socializing.

However, arguments always arise as some people claim that browser can help you with such problem. But the same people don’t realize that to open multiple social media websites, you’d have to open multiple URLs to access different sites which wouldn’t a good sight? Furthermore, using a browser also attracts the prying eyes who work on a regularly basis to somehow gain access to your private socializing activities. However, this app (social media vault) is made to provide you a constant force of security without any such fear or threat of data loss. To gain access, one must provide a passcode (which is known only to you) and thus reduces the risk of any suspicious activity!

But that’s not it! This application is designed to do much more. You have the ability to use the feature of panic switch in any case. For example, if someone (you do not trust) is passing by and you don’t want them to peek into your private stuff, you simply shake, flick or place your palm on the screen to close the app.

This feature lets you monitor and identify anyone who tries to access your personal photos, videos, files, etc. in your absence or simply when you’re not looking. This app simply clicks the image of such unauthorized user using the front camera and lets you capture the culprit quite easily.

Therefore, Social Media Vault is a complete application that lets you use multiple socializing networks through its secure interface, lets you use the feature of Panic Switch and even captures the image of the unauthorized user who seeks access to your private data in your absence.