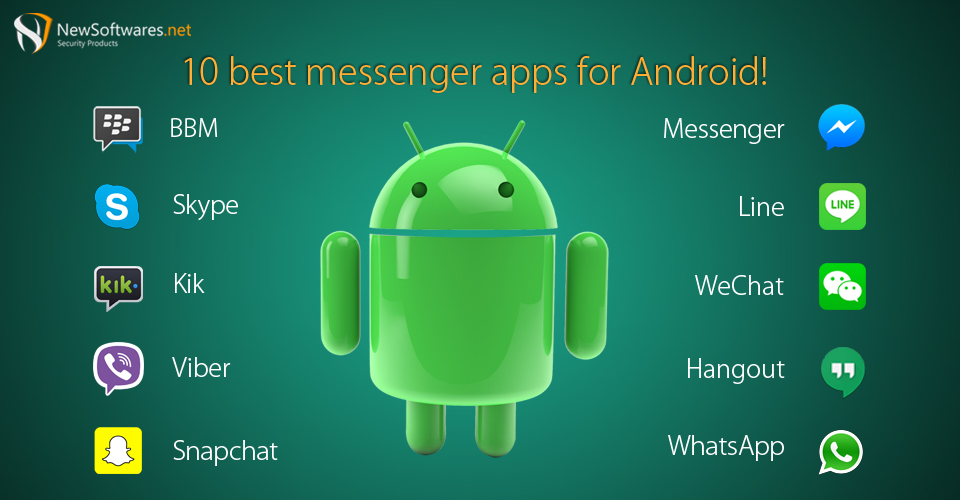 In the ever growing world of smartphones, the use of Instant Messaging apps has played a huge role in connecting people conveniently and for free. Thanks to Instant Messaging apps, text messages has become a thing of the past. The best messaging apps today mostly do the same stuff, but it’s the different user interfaces and some extra functions which make them so great. But also leads to serious competition between them.

In the following list, I’ve compiled together a list of 10 best messaging apps which you can use to communicate with your friends and family;

Facebook Messenger, despite its flaws, is one of the most popular messaging app ever. What makes this one so hard to walk away from is that a billion people use Facebook and all Facebook users inherently have Facebook Messenger. That means most people you know can already use this app with no setup required. Apart from the total convenience, you also have the ability to place free voice calls, use stickers and emojis, etc. Facebook is slowly integrating more features over time. It’s a solid app, even if it does lack customization or any real settings.

BlackBerry Messenger was all but dead a couple of years ago until the company revived it on Android. It has since gained a small, but loyal following and the application itself isn’t half bad. It features an always-on premise that keeps the app loaded into memory at all times. You can also use BlackBerry Voice for calling and the file sharing has been expanded to files, documents, and voice notes on top of the usual photos and images. It’s one of the better, more solid messenger apps and it’s worth a shot.

The good thing about Google Hangouts is that most people who use Android, Gmail, or Google+ already have Google Hangouts. That gives it a fairly substantial user base which makes convincing your friends to use it easier than most other platforms. Hangouts itself is a fairly stable and decent service that includes messaging, free voice calling, free video chatting, and even the ability to put your SMS conversations there (for the time being). You can send emojis, stickers, and also cool stuff like gifs and even your location.

Kik Messenger is one of the more popular messaging apps that lets you use a username instead of your real name. That makes it a popular option for those who like to socialize without giving up their identity and is especially good for gamers. It includes stickers and emojis along with group chats and you can share images, videos, gifs, and can even play games.

LINE is one of the most popular messaging services in the world with over 100 million downloads. It’s a pretty decent messaging app. Recent updates have brought it in line with Material Design guidelines which means it also looks pretty good. In terms of pure features, LINE remains simple. There are emojis and stickers with users being able to augment that by sharing photos and videos. There is also a social media aspect where you can keep a Timeline so people know what you’re doing, if you want them to know that is.

Viber has quietly become one of the premiere messenger apps in the world and it currently boasts more than 660 million active users. As a messaging service, it’s rather run of the mill, with the standard group chats, emojis, and stickers. You can also make free calls to other Viber users free of charge. The service also features games, the ability to delete messages after they’ve been sent, and there is even Android Wear and cross-platform support for PC users.

WeChat has got it all, whether it’s video calling, voice calling or free messaging you’re looking for. It boasts powerful features such as Moments which allows users to share their favorite moments and memories with photos and videos on a personal stream, and a Friends Radar, allowing you to scan your surroundings for people using WeChat and connect with them.

Snapchat has grown immensely over the past couple of years, mainly due to large teenage fan following which the app managed to father with their unique take on Instant Messaging. Snapchat basically enables live video conversations with selected friends with the added twist that all video messages can be viewed for 10 seconds before they are deleted from the company’s servers (as claimed).

This is our favorite video calling application on the list, and is undoubtedly one of the most popular in the world. Even though it’s known for its video calling and voice chatting capabilities, Skype is a pretty robust messaging service as well. Apart from sending text messages, it allows you to send emojis, photos and various types of files including documents and videos if you so choose. There is also individual conversations, group conversations, animated emojis, and you can even port in contacts from Facebook if you need to. It’s a solid service with cross-platform support and it’s completely free to use (with other Skype users).

Last but not the least is Facebook’s owned WhatsApp. It’s an app that truly needs no introduction. WhatsApp has managed to make its way on phones around the world, whether they run Android, iOS, Windows or any other OS. It is by far the most convenient and most popular Instant Messaging app around the world and is used by millions of people every day. It is one of the few apps in history that can boast more than one billion downloads. Using this service, you can chat as well as group chat with pretty much anyone. WhatsApp developers have been slowly adding in all the kinds of features, including voice calling, over the last couple of years and its momentum only seems to be growing.

Read About: Huawei to launch smart phone with 4,000 mah battery for only $157