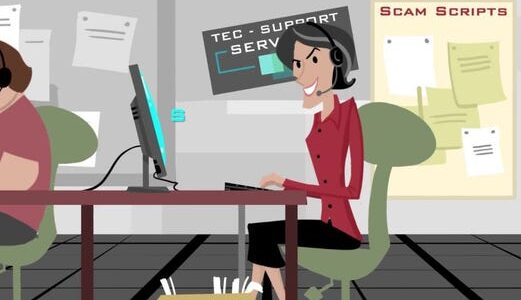 In my previous blog, I discussed a very elaborate scam involving fake representatives of Microsoft tech support, and how they were involved in scamming thousands of unsuspecting victims. Well, once again – with great regret – I have learned that these scammers are back in business with more persistence and aggressiveness. In fact, this scam campaign is so belligerent – it’s scary.

Even after being shut down by the Federal Trade Commission, recent spikes in complaints from Microsoft confirm that this campaign to dupe its customers has intensified – according to recent report published by Microsoft.

In the past two weeks, Newsoftwares.net has investigated these claims, and found that newer tactics are being employed. The scam campaign employs aggressive sales and marketing strategies, combined with half-truths (mainly used to convince their victims). In case you didn’t read my past blog, and don’t know how the scam works, I will explain it again. The scam involves a Microsoft customer receiving a phone call from countries such as India or the Philippines. The caller (the scammer) on the end explains to the customer that there is problem which needs to be fixed on their PC immediately – otherwise their PC could crash and all the data would be lost – if they want the problem fixed – the customer would have to allow the technician to remotely access his or her PC. Those who are most likely to be duped are the elderly and the less-tech-savvy. Once the fraudsters are able to gain remote access to victims PC, they usually ask for compensation to have the problem fix, if the victim refuses, the scammer may delete important system files – or other files which may corrupt Windows.

This scam was first reported in 2010, and then picked up steam in 2011. In 2012, the FTC tried shutting this fraud racket down. However, it seems like this scam is still ongoing and experts say that It has become more aggressive than ever before.  Some have also resorted to stealing personal data in case of non-payment, thus leading to identity theft. Expert warn all Microsoft users that they should password protect folders containing sensitive/personal data, regardless of any chances of falling victim to such scams.

If you feel that you have received a phone call involving a telephone scam, you can complain to the Federal trade commission online:

Although, the FTC may not help you with your individual case, it does take your complaint into consideration, which will later be used in conjunction with other complaints for prosecuting those who are responsible behind this scam.

However, experts warn that bringing the perpetrators to justice is no easy feat. According to Ned Banister, data security analyst at Newsoftwares.net, prosecuting such individuals is virtually impossible. According to Bannister, “Since these scams are being played around in countries such India and Philippines, the FTC does not hold jurisdiction in these countries, and therefore, its efforts will be futile”.

Banister warns that users should avoid all calls that involve paying money, and if your gut tells you something is wrong – then trust your gut feeling.